“If you developed your talent plan pre-pandemic, it’s obsolete,” Media Sherpas CEO and former 4A’s chief Nancy Hill told 30 agency leadership teams at last week’s Americas Summit in Denver for Worldwide Partners, the longstanding independent agency network whose membership has swelled to more than 70 agencies in 40 countries. “In the absence of a physically shared space, the reality of the work itself is not enough to keep people happy or engaged. Employees do not feel taken care of, and they are increasingly burned out, pissed off and disengaged. This is the single biggest issue agencies face.” 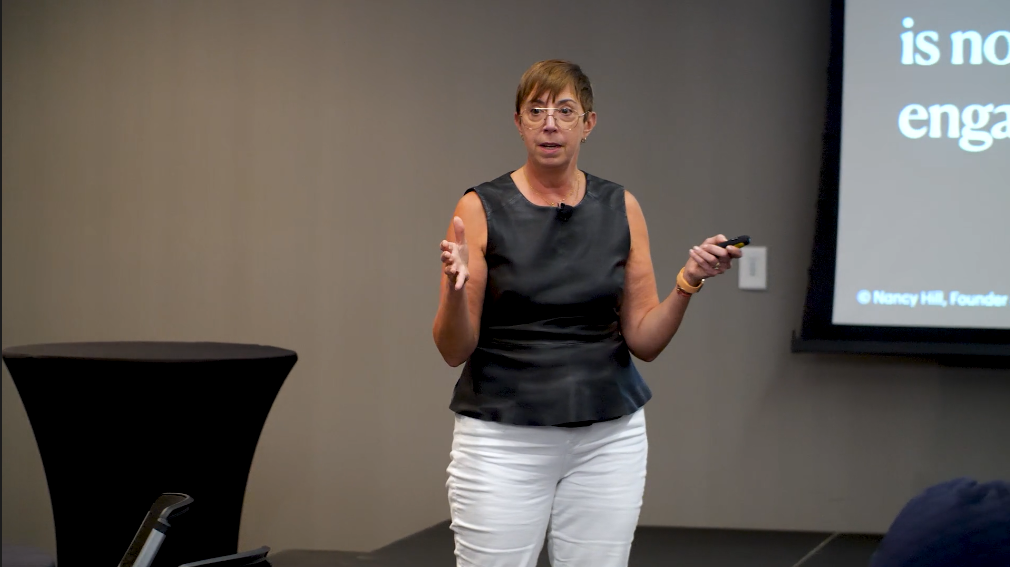 Hill based her assessment on more than 100 employee interviews, a series of focus groups, and deep dives on Fishbowl and Glass Door she did this summer on behalf of several agency clients. Over the summer, she found agency turnover growing from 25% to more than 40% per month, with employees increasingly resigning in groups.

Agencies need to start prioritizing wellness over productivity, and ultimately make employee wellness a key productivity measure, Hill said. Her research has identified that employees want pay, PTO and respect. She cited some promising steps agencies are taking toward rebalancing the employee experience such as deleting Slack from phones, banking emails between 8pm and 6am, paying lower-level employees 15% more, creating four-day workweeks and instituting mandatory time off.

“We need to stop presenteeism,” Hill said. “Agencies say we have unlimited time off, but everyone feels pressure not to take it. It’s like the old days when you had to get into the office before the boss – somebody’s paying attention to where you are – there’s pressure to be on point and on call. People aren’t going to put up with that. Agency leaders need to lead by example here. Make it public you’re on time off and stop calling in from vacation.”

As people come back to the office, agencies need to preserve their flexibility to take care of their personal needs on their own time. “We've reached an inflection point,” Hill said. “People have reorganized their lives to do their jobs and deliver for their families, and they want to go to the grocery store in the middle of the day, not at 7pm. You need to sit down with your people and learn their new patterns, because honoring them will make all a huge difference.”

Hill said agencies need to rethink recruiting, starting with what a fresh perspective on the skills and personalities they really need. She said some agencies are foregoing resumes in favor of asking prospective employees to define their ideal job descriptions and personal goals.

“It’s time to short-circuit the hiring process,” Hill said. “We're still putting people through our old ways of hiring – four to five rounds of interviews and case study presentations – which is a total turnoff.”

Agency leaders need to sell people personally rather than rely exclusively on HR, Hill said. She cited her own experience with the University of Mount Union, where she is a trustee, which has dramatically improved recruiting by having department heads talk directly with prospective students. When a prospective account director gets a call from the Chief Strategy Officer, or a prospective copywriter hears from the Chief Creative Officer, Hill said, they feel special. It’s clear they matter to the agency.

Agencies need to flip the script on pay by focusing on long-term value, Hill said. “Don’t play into the rising salary game everyone else is doing,” she said. “Change the conversation to how you’ll help people invest for their futures. Pay off their student loan debt and give them self-directed 401K programs where they can invest in areas like sustainability where their passions lie.”

“Manager is not a title, it's actually a role – one we need to redefine fast,” Hill said. “Managers are your frontline for engagement and development, and many of them are behaving in frightening ways. They don’t know how to nurture and grow their team members, especially in a dispersed and remote environment, and most agencies suspended management training in the pandemic when they needed it most.”

To encourage managers and foster career development, Hill said agencies need to make retention a key part of management compensation. Agencies also need to emphasize personal growth plans that include people’s life as well as career goals. “Managers need to build relationships with employees based on how they learn and what they want,” she said. “And they need to participate more actively in people fulfilling their overall goals.”

Hill called for agencies to formally separate people resources from HR to provide servant leadership. “Many agencies always had somebody in creative services watching out for the creative department,” she said. “That needs to be a much broader role, so across the agency you're matching people's desires with the resource deployment you need.”

Worldwide Partners summits bring together elite independent agencies that are partners in the global network. The meetings highlight one of the principal values of the organization – open, honest collaboration and feedback on the pressing issues and opportunities reshaping agencies. Hill’s address formed a centerpiece for the first in-person summit Worldwide Partners has held since October 2019. Worldwide added six partners in the past 12 months and is on pace to grow 20% this year. Because it brings together specialists across disciplines and geographies, the network increasingly fields inquiries from clients looking for bespoke agency solutions.

Worldwide Partners adds two new board members to help guide the network through the unfinished global crisis and plan for advanced growth in the future.