Could 2020 Prove to Be the Golden Age for Independent Agencies?

Could 2020 Prove to Be the Golden Age for Independent Agencies?

Written by Erik Oster and first published in Adweek on January 6th 2020.

Despite the high-profile closings and acquisitions in 2019, 2020 could be a great year for independent agencies.

Industry trends, including clients moving to project-based relationships and new capabilities leading to the democratization of data, are cutting down on scale-based advantages of global networks, allowing independent agencies to thrive.

In December, Wieden + Kennedy was awarded Adweek’s U.S. Agency of the Year title for the second consecutive year, in part on the strength of being named U.S. creative AOR for McDonald’s over Omnicom’s dedicated unit We Are Unlimited. A few weeks prior, Knoxville, Tenn.-based independent agency Tombras expanded to New York with three new client relationships shortly after hiring Barton F. Graf and JWT vet Jeff Benjamin as CCO.

Forrester principal analyst Jay Pattisall called W+K “the exception rather than the rule.” However, he also noted that the independent agencies gaining the most ground are those that “have a mindset or an acumen toward using data and technology and digital channels as a key ingredient.”

The Agency Sherpa founder Nancy Hill said she was seeing increased interest from marketers “across the board” to work with independent agencies. “They’re looking for solutions, and they’re looking [everywhere] they can think of to look,” she said.

Many independent agencies see opportunity in an area where holding companies have struggled: the transition to project-based relationships.

In the case of independent agency network Worldwide Partners Inc., member agencies team up to pitch, providing brands with perspectives from multiple markets and expertise in specific areas.

Harris cited the “democratization of data” as one opportunity for independent media agencies. With many clients relying on first-party data and building their own data platforms, independent agencies invest in analytic platforms and talent.

“Through a proliferation of tech and network partnerships, independent agencies can compete with anyone globally, whether they’re holding companies or not,” added Andrew Fischer, CEO and co-founder of Choozle, a digital marketing platform that connects shops with data-analytics capabilities.

She explained that clients in the $50 million to $100 million range “[have] not had a full-service media offering available to them unless they wanted to get buried at one of the holding company agencies.”

“If they have had a holding company media agency, they’re feeling forgotten and not necessarily well served,” Hill added.

While holding company agencies have previously relied upon advantages of scale, Fischer said programmatic has eliminated that argument. Hill explained that more clients were recognizing that volume didn’t necessarily translate to better or cheaper buys at a time when they’re seeking to cut costs.

Data around the state of independent agencies 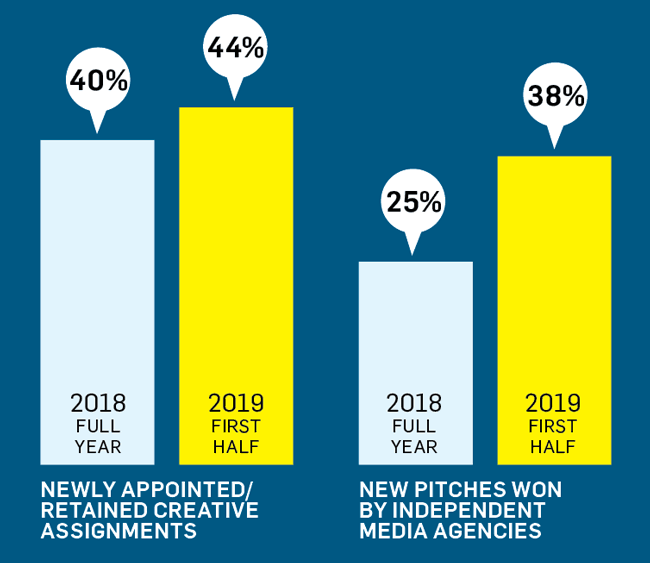 In 2018, 40% of 134 newly appointed/retained creative assignments recorded by data consultancy COMvergence went to independent agencies. For the first half of 2019, that total jumped to 44% of the 70 assignments, according to COMvergence founder and CEO Olivier Gauthier. In the first half of 2019, two creative independents were among the top three agencies for new business performance based on spending volume, according to COMvergence: Mother and Wieden + Kennedy. Gauthier said that independent media agencies won 34 of the 138 pitches COMvergence assessed in 2018 (nearly 25%), representing $1.9 billion of $12.3 billion in spend (15%). For 2019’s provisional total, that number rose to 56 of 149 pitches (nearly 38%), Gauthier said, representing $1.34 billion of $9.5 billion (14%).

Will they stay independent?

Success brings about the question of whether such agencies will retain independence. While some shops will undoubtedly seek acquisitions, the buyers are far less likely to be the holding companies that scooped up an earlier batch of indies in the early 2000s.

The most high-profile acquisition of 2019 was Accenture’s purchase of Droga5. Harris anticipates more interest from consultancies in the short term as they fill existing needs. Private equity is an increasingly attractive option, especially minority investments that provide capital while offering more autonomy.

“Agencies realize that they’re going to need to access capital, and there are always going to be some trade-offs,” said Harris. He added that agencies are treading carefully when considering such moves.

Hill explained that, given the role of client portfolios in such acquisitions historically and uncertainties around project-based models, buyers are also remaining cautious.

“It takes longer for an independent agency to get to a place where a potential buyer is comfortable that you have a consistent revenue stream,” she said. “The opportunities for success [for independent agencies] are greater than they probably ever have been.”

Those opportunities include alternative pathways to growth, including independent agency networks like WPI.

“This is not just a moment for independent agencies,” Harris said. “It’s a movement.”

New Normal? Independent Agencies Were Made for This

It’s time to shift the conversation from whether independent agencies will survive the global crisis to how they can lead brands and advertising to a deeper relevance and resonance with people around the world.